Once again, the COVID-19 pandemic prevents us from gathering in Canso. Events our size simply can’t happen this summer in Nova Scotia. Through an exciting partnership with the deCoste Performing Arts Centre we are announcing four concerts for July and August. There will be 100 tickets available to attend the event live at the theatre, and unlimited livestream tickets. You won’t want to miss these great concerts:

Here is what you need to know:

Gordie Sampson is a Grammy award-winning singer-songwriter and producer from Big Pond, Nova Scotia. Beginning his career as a performer back home in Cape Breton, releasing four solo albums, Sampson has gone on to achieve international success as a songwriter based in Nashville. He has written songs for Carrie Underwood, Keith Urban, Faith Hill, LeAnn Rimes, Blake Shelton, Miranda Lambert, and Rascal Flatts, among many other country performers. Awards and accolades, including a Grammy Award, a Juno Award, two ASCAP Awards, 14 East Coast Music Awards and honorary degrees from Cape Breton University and St. Francis Xavier University. Gordie has been a frequent performer at Stanfest, so it is great to kick this series off with his show.

July 16
Lennie Gallant in Concert
With Selections from his Hit Musical, Searching for Abegweit

Recognized by his peers as one of Canada’s best performing songwriters, throughout his career, Lennie Gallant has released thirteen albums (10 in English and 3 in French) of original songs which have won him a host of awards and nominations from the JUNOs. He was named Canadian Folk Artist of The Year for 2016 and his song Peter’s Dream was voted one of the Top Ten East Coast Songs of All Time.
He was inducted into the Canadian Songwriters Hall of Fame, is a recipient of the Order of Canada and is an international touring artist, who has performed all over the continent, in Europe, for the troops in Afghanistan, and at the XXI Winter Olympics. We are pleased to have Lennie back to share original music from his extensive career along with selections from his hit musical Searching for Abegweit, which boasted 140 full-house performances. Lennie has performed at many Stanfest events over the years. 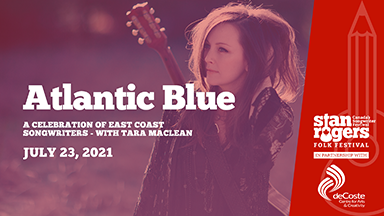 Celebrated PEI born singer/songwriter Tara MacLean takes you on a journey into the past, sharing the story of how music arrived and thrived on the East Coast of Canada. Atlantic Blue celebrates the lives and songs of Ron Hynes, Gene MacLellan, Hank Snow, Stan Rogers, Stompin’ Tom, Rita MacNeil, The Rankin Family, Lennie Gallant, Gordie Sampson, Sarah McLachlan & Shaye. Employing film for the biographies of these brilliant writers and live music to illustrate their work, Tara‘s epic voice transports the audience to a place of deeper understanding and connection with Atlantic Canada and our most treasured music. Atlantic Blue is a captivating experience that is sure to bring Atlantic Canadians together in celebration and solidarity for our way of life and the songs that helped the world fall in love with us.

This special evening is a double-header. In addition to a concert with Celtic supergroup Còig, and some surprise guests, we will be launching our brand new book The Power of Song – 25 Years of Stanfest, This 300-page pictorial retrospective features over 1,000 images and countless stories. Learn more and get a sneak peek here. Books will be on sale that evening, as well as online for those streaming the show. 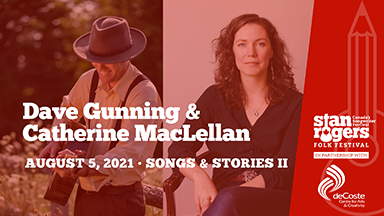 Dave Gunning is a Canadian folk singer/songwriter from Pictou County who is best defined as a master craftsman. Over the course of 25+ years and a dozen albums, he has diligently sharpened his skills, developing into a poetic storyteller and emotionally convincing singer with few equals. Catherine MacLellan is one of Canadian folk music’s true gems, having been fortunate enough to inherit her father, Gene MacLellan’s musical talents. Catherine prefers to stay away from the limelight of celebrity status and so continues to live in rural PEI where she works diligently at her craft. She has achieved multiple awards, especially in the folk music category including East Coast Music Awards, Canadian Folk Music Awards, Music PEI Awards, as well as a coveted JUNO Award. Having Dave and Catherine come together to perform together will feel like catching up with a couple of old friends, having heart-felt conversations about songs that mean so much.