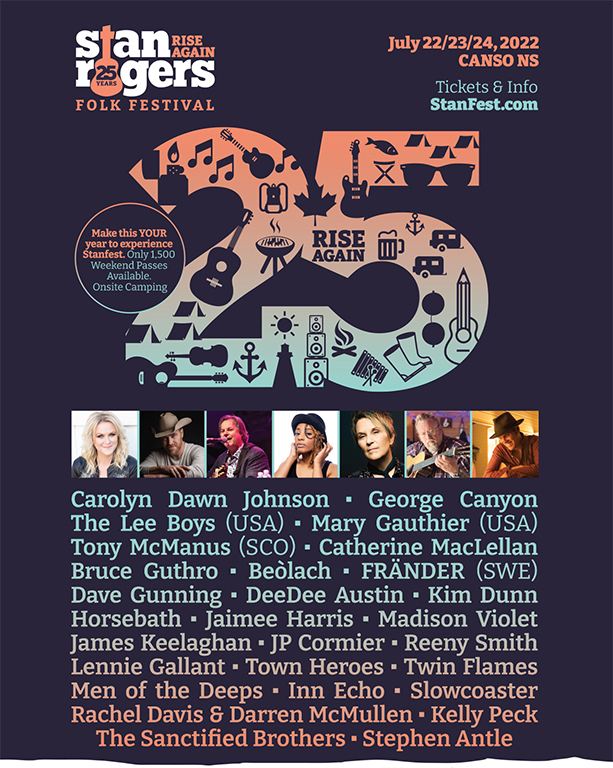 “This is our 25th anniversary, and it will be a true celebration after two COVID-cancelled years,” says Troy Greencorn, Stanfest’s Artistic Director. “The extended Stanfest community is ready to gather again. Even before this line-up announcement, our ticket line has been ringing off the hook. This year is a family reunion, both on stage and off. Our line-up kind of wrote itself, with many of the home team and favourites from the past 20+ years.”

Stanfest is more than a traditional folk festival. We pay tribute to Stan’s legacy by celebrating songwriters and offering an eclectic mix of musical genres, and styles.

Consistent every year, the lineup builds on a solid core of East Coast talent and this year is no exception presenting festival alumni: Dave Gunning, Bruce Guthro, J.P. Cormier, and Lennie Gallant along with rock bands Slowcoaster and the Town Heroes and traditional Celtic artist group, Beolach.

International acts performing will include funk and gospel band, The Lee Boys and Grammy-nominated folk singer-songwriter and author Mary Gauthier, both from the US along with finger-style acoustic guitarist Tony McManus from Scotland and modern acoustic folk group Fränder from Sweden.

Over the years, the festival has helped launch Atlantic Canadian artists on to bigger stages across the country and around the world. This year’s emerging songwriting talents include three acts from Nova Scotia, including Indigenous musician, Dee Dee Austin from Fall River, power-house vocalist, Reeny Smith from North Preston, Horsebath, a group with strong Guysborough County roots and Prince Edward Island based Celtic group, Inn Echo.

“While it has been crushing to be sidelined for two seasons by the pandemic, we have used the time constructively, keeping in contact with our audience with livestreamed shows and releasing a 300-page retrospective book, remarks Greencorn. “The break has also given us time to revisit and refresh our model, ensuring a bright future for this signature nova Scotia festival.”

This year, Stanfest is limiting its audience to 1,500 weekend passes to ensure attendees feel safe and uncrowded. Additionally, the daytime program has moved away from 4-5 smaller stages and will focus on three larger stages, one of which will be the mainstage. Shows will take place on the mainstage from 10 a.m. until 10:30 p.m. each day with over 30 hours of concerts on the three stages.

“We will be leaner, more condensed, and more sustainable going into our third decade, adds Greencorn. “Within a week or two we will be announcing our full schedules, and our audience can expect the same exciting mixing and matching of artists and groups that has become the Stanfest tradition.”

Tickets for the festival are on sale now. Advance weekend passes are $145 plus tax and day passes vary in price and are available here: stanfest.com/tickets. Children 12 and under are FREE.

RV sites are $90 plus tax and tent sites are $70 plus tax. For more information, visit: stanfest.com/tickets.